The History of Orvieto

Orvieto has a unique history that dates back to over several million years ago. Learn about the origins of the city, its ancient inhabitants and great civilizations (etruscans and romans), and the special characteristics that make it a magical place to visit today. 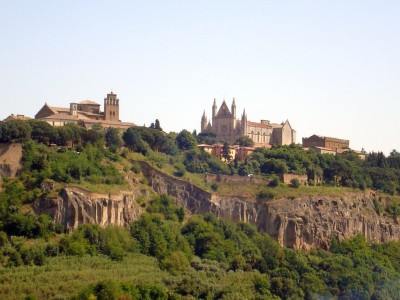 The origin of the Orvieto rock is most likely due to an ancient volcanic eruption. The geological setting that characterized the entire central part of the Italian peninsula was a large expanse of water that over the years saw emergence of land.
This land developed into different volcanic systems and, in all probability, the thunderous action of some of them generated and scattered enormous masses of rock.

It is believed that today’s rock on which today stands the city of Orvieto is one of these great masses of tufa rock thrown from the large crater that is now Bolsena lake. Geological studies have shown that the material that makes up the cliff of the city is of volcanic origin and has different textures, some more solid than others. There are several evidence and trails of the city origins and past, in particular you can see them looking at the old tufa rock and fossil trees, recently discovered in different city caves and undergrounds. 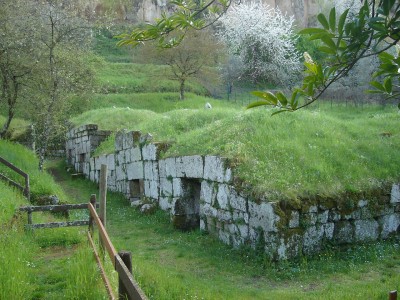 Orvieto has been a city of great prestige in several different historical periods. Beginning in the 9th Century BC the Etruscan civilization experienced a period of great splendor and importance. This was the most important town of the vast territory of Etruria.

Archaeologists and historians discovered, in an area below the cliffs, what they believe to be the famous “Fanum Voltumnae”: the ancient Etruscan sanctuary that is thought to be the center of the Etruscan religion. As well as being the religious center, the city of Orvieto, in Etruscan “Velzna”, was the political center, where the leading exponents of the 12 major Etruscan cities (dodecapoli) would gather. Even today, excavations are made in the area adjacent to the rock of Orvieto, where the Fanum Voltumnae is probably set.

Among other findings are the Crocifisso del Tufo necropolis, located on the side of the cliff overlooking Orvieto Scalo and Sferracavallo, the remains of the Temple of Belvedere, near Piazza Cahen, and San Patrizio Well. In addition to these sites you can see many valuable and significant collections of Etruscan pottery and objects, now housed in several local museums.

The Etruscans inhabited Orvieto until the 3rd Century BC, when the Romans invaded “Velzna”. It took the Romans two years to conquer Orvieto, which is a natural fortress, with its cliffs on all sides. The Etruscans had dug an intricate web of caves and numerous wells, so they were able to defend Orvieto for a long time. 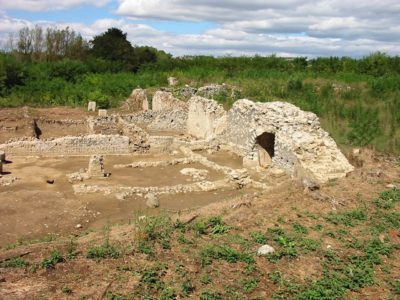 After a big revolt, the servants of Velzna (Orvieto) were able to seize power. The Etruscan aristocrats, therefore, in secret had to ask aid to the Romans, who sent to the city an army led by the consul Quintus Fabius Maximus. The clashes were very hard and led to the death of the console itself, thus causing the most violent Roman repression, which resulted in the siege of the city for several months, until its destruction in 264 B.C. The few survivors were “exiled” to Volsinii Nova, today Bolsena, and managed to return to the cliff where it still lies Orvieto only after the end of the Roman Empire.

When the Romans seized Orvieto, they forced the Etruscans out of the city and relocated them in Novi Velzna (known today as Bolsena). Unfortunately, the Romans destroyed most of the evidence of the Etruscan civilization. The Romans used the area of Orvieto to supply crops, wine and other goods to Rome. Today there are few traces of the existence of the Roman civilization in Orvieto: Ponte Giulio (bridge) in Allerona Scalo and a recent discovery of the remains of a Roman harbor that was a very important trading route, Porto di Pagliano, located along the Paglia river – about a 10 minute drive from Orvieto.

The Middle Ages were an important time for the city of Orvieto. It was a period of great wealth, beauty and expansion. In 1200 AC Orvieto became a modern, functional city-state, controlling the surrounding territories from the present-day town of Orbetello to the shores of the Tyrrhenian Sea. In this period the city was called “Urbs Vetus” (old town), which originates from the current name of Orvieto. During the Middle Ages Orvieto had a well organized political system and urban structure, distinguished by four districts: Serancia, San Giovenale, Postierla and Santa Pace. At that time Pope Urban IV lived in Orvieto  because of the civil war in Rome. He commissioned the construction of the Duomo to be built alongside his palace. The fountain in Piazza della Repubblica, Palazzo del Popolo and Palazzo dei Sette were also built during this time.

Orvieto and the Papal State – This period of wealth and prosperity lasted until the year 1348 when the plague, and constant political fighting among the great noble families (especially between Monaldeschi and Filippeschi, the most important noble family of Orvieto and surroundings) put an end to Orvieto being a free municipality and city-state.

From 1600 to 1700, Orvieto underwent profound architectural changes: the Albornoz Fortress was re-built, as well as many fine Renaissance palaces (Palazzo Monaldeschi, Palazzo Clementini, Palazzo Coelli, Palazzo Simoncelli…).
In this period, the city, which was an important papal province, found economic prosperity thanks to its popularity among popes and cardinals who considered it to be a quiet and safe place to stay not far from Rome. The development of the city partly initiated by the presence and attendance of high prelates and pontiffs was consolidated and found further impetus from 1860, when Orvieto became part of the Kingdom of Italy and the Savoy State becoming almost a frontier point between the latter and the Papal State itself.

The urban renewal of the city has continued into modern times. Between 1800 and 1900, Orvieto experienced a period of restoration and  work was completed to renovate existing buildings and work intensified in upgrading roads and telecommunication infrastructure. For example, in 1888 the first cable car (known as the Funicolare) was created and powered by an extraordinarily advanced water tank system. Today, the Funicolare (now electric) still connects the center of Orvieto with Orvieto Scalo (where the train station is located). The last major works to be reported in 1900 are the construction of two large military bases, called Caserma Piave and Caserma Monte Grappa.

Much of the recent history of Orvieto is also represented in the town hall’s official symbol.
It is composed of: a red cross on a white background, symbolizing  the loyalty of Orvieto to the papal party called Guelfi; a black eagle, referring to the Roman domination; the lion, symbolizing loyalty to the papacy of Orvieto; and the Goose, a clear reference to the geese that saved the Campidoglio in Rome. 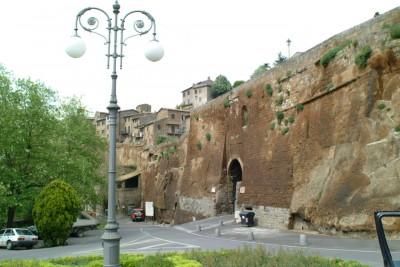 Today Orvieto is a city with a downtown area that covers the entire surface of the plateau it sits on. In fact, its characteristics and the distinction of being almost suspended and isolated from the rest of the valley below have helped it in maintaining its integrity and preserving the original shape.

There are still several access points to the city through large gates like in the Middle Ages. Within the last centuries, some of them have lost their functionality but remain as a fascinating and evocative piece of historical evidence such as the beautiful Porta Rocca (or Soliana) or the demolished Porta Cassia. Other doors still work today, such as Porta Maggiore (at the end of Via della Cava) and Porta Romana.

Today, Orvieto is divided into 4 districts (quarters as known by locals): Corsica, Serancia, Olmo and Santa Maria della Stella. The main road that runs through most of the old town is Corso Cavour, which connects the two main squares: Piazza Cahen and Piazza della Repubblica. The Torre del Moro (clock tower) is at the crossroads of the main streets located where Corso Cavour crosses Via del Duomo. The oldest part of the town is where San Giovenale church is located. This is also the oldest church of Orvieto, and one of the oldest in Umbria. It was built right over the remains of an Etruscan temple in 1004, and is outlined by a particularly beautiful area of the city with many narrow streets. This area of the city was also the first to be developed in the Middle Ages.

However, outside of the cliff the powerful Medieval town legacy is still clearly visible: several castles and villages are scattered throughout the valley and hills around the city. Their goal was to protect Orvieto from foreign attacks. Today, there are many castles still intact: the Castle of Tordimonte, the Castle of Corbara, the Castle of Prodo, the Castle of San Quirico, the village of Torre San Severo and the Castle of Sugano. 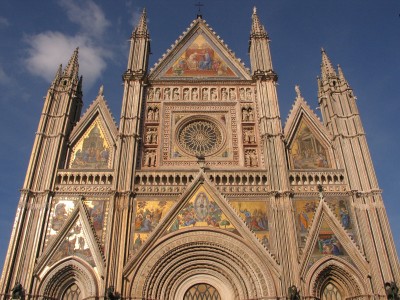 Orvieto is a city full of impressive monuments, churches and noble buildings – where some are over 2,500 years old. Here you will find information on the most famous places to explore in Orvieto.
Rocca-Fortezza Albornoz – Located next to Piazza Cahen, this ancient fortress now houses a public park. It is a beautiful spot to enjoy amazing views of the Umbrian landscape that surrounds Orvieto. Bring a blanket for a picnic or read a book on one of the many benches. 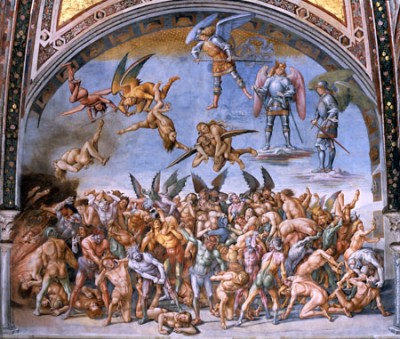 The Duomo – Located in Piazza del Duomo, the Duomo is an amazing masterpiece of Gothic and Romanesque architecture. A symbol of the city itself, The Duomo was commissioned by Pope Urban IV. Construction began in 1290, but took several hundred years to fully complete.

The majestic three-gable façade is decorated with detailed mosaics in stunning colors and pure gold, as well as large bas-reliefs and statues. The bas-reliefs on the façade represent Old and New Testament biblical stories, and are considered to be some of the best 14th Century sculptures.

Inside the cathedral are two important chapels. One houses the Corporal of Bolsena miracle (miracle of the consecrated host which flowed blood and stained the linen still preserved in the very precious tabernacle, and is exposed in public during the procession of Corpus Domini). The second chapel, San Brizio, is filled with frescoes by Luca Signorelli (approximately 1500) with stunning depictions religious and apocalyptic scenes.

In the center nave of the Duomo sits twelve monumental statues of the Apostles that were built between the late sixteenth and early eighteenth century. These statues were recently exhibited in the church of Sant’Agostino, near San Giovenale. These statues, like many other precious objects and works formerly in the Duomo, will be part of a project for the expansion and relocation of the Museum dell’Opera del Duomo, in the Palazzo Soliano. Already on the ground floor you can see an exhibition of bronze sculptures by Emilio Greco.

San Giovenale church – The entire downtown area of Orvieto is filled with numerous churches of different architectural styles and sizes and that were built at various points in history. The oldest one is San Giovenale, whose construction dates back to 1004. Situated in a Medieval quarter (Quartiere Medievale), San Giovenale remains almost unchanged over the centuries.

San Franscesco church – San Franscesco was built on top of the remains of an Etruscan temple in 1240. It stands at the highest point of the cliff of Orvieto. San Franscesco is an impressive church that has great importance to the history of Orvieto. The most notable point in this church’s history was in 1297 when the canonization by Pope Boniface VIII of King Louis IX of France was held there.

Sant’Andrea church – Sant’Andrea is located in Piazza della Repubblica next to the Town Hall. This is a beautiful church with a twelve-sided tower.

Pozzo della Cava – located in the heart of the old medieval quarter of Orvieto is Pozzo della Cava. Self-guided and guided tours are available of this impressive hand-dug Etruscan Well. There are many palaces belonging to noble families that grace the city of Orvieto.

Click to get more info about Orvieto’s curiosity and topics